First, forecasting method First, forecast from seedling volume. Generally, sowing is too early, the seeding rate is too large, the total number of stems per acre before overwinter exceeds 800,000, and the wheat field with a maximum tiller exceeding 1 million in spring can easily cause field canopy closure, poor ventilation and light transmission, weak internodes at the base, and stalk supporting force. Low, may cause lodging. The second is to predict from the appearance of the leaves. When the wheat rose to the jointing stage, the leaves were dark green, and the leaves were covered with hypertrophy. When the length of the undercoat was more than 1/3 of that of the whole leaf, there was a possibility of lodging. The third is to predict the species characteristics. The taller stalks in the first and second basal parts, where the stalks are weak and the toughness is poor, are easy to fall down. The fourth is to predict the management of fertilizer and water. Fertilizers are abundant or even excessive. In particular, the excessive use of nitrogen fertilizers causes wheat to grow in length, internodes, and fine grain crops, which may cause lodging. Fifth, when the water is poured or the water is poured during the filling period, it may cause the roots to fall.

Second, preventive measures First, the potential for lodging in the wheat fields for deep cultivators. Usually before returning to green or returning to the early Qing period, part of the root system is cut off, nutrients and water absorption are reduced, ineffective delivery is controlled, effective delivery is controlled, the internodes are elongated, and the lodging resistance of wheat is increased. The second is a reasonable fertilization watering. For wheat fields that are at risk of lodging, increasing phosphorus and potassium fertilizers, and shifting nitrogen fertilizers, the watering time for topdressing can be postponed until the jointing stage. The third is early control. For wheat fields that are likely to be lodging, use paclobutrazol, etc. before jointing and then spray the wheat seedlings according to the instructions. Note that the control of wheat must be carried out before the jointing. After the jointing, the preventive effect should not be obtained. Fourth, pay attention to watch the weather forecast in the later period of watering and avoid watering in the windy weather.

Work Systems of the Testing Room
1.  Keep the testing room clean and quiet, and pay attention to electrical safety.
2.  Before testing, metal and communication equipment on the tested person`s body should be removed for proper placement.
3.  Those who wear pacemakers are not appropriate for testing.
4.  During work, inspect whether the power supply and the testing system are in a good using condition.
5.  In the testing process, the operational regulation must be strictly observed.
6.  Out of work, cut off the power supply and clear up the used equipment and the tester to make them be in a good standby condition.


The Quantum Magnetic Resonance Analyzer replaces the need for ultrasonic, nuclear magnetic resonance or radiography for various health related conditions. Holding sensors in your palm simply, health data will be collected within minutes from various body systems. The magnetic resonance analyzer offers new advantages in the field of material analysis. It has been shown that the applicability of such an analyzer exceeds the range of tissue analysis and other medical applications. The magnetic resonance analyzer measures the degree and type of response of a matter under test, and by comparison with reference matter it assists in recognizing deviations from the desired response. The software interface has updated high technology that the operation is more convenient and faster. The main future is 2 languages in software in one machine, both with English and another language. 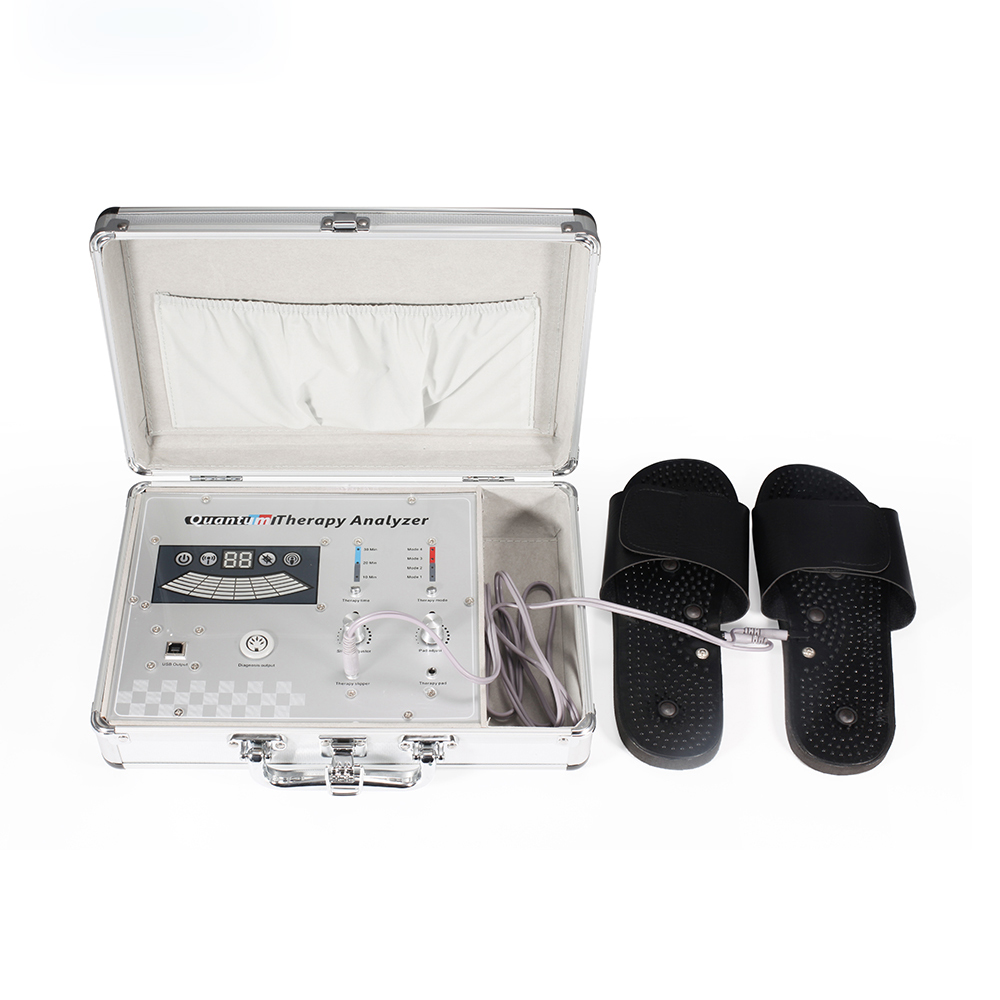