In the process of mushroom production, it is often jeopardized by diseases and insect pests. If the control is unfavorable, mushroom cultivation will fall into a vicious circle. If it is light, the production will be reduced, and if it is heavy, the cultivation will fail. Therefore, it must be highly valued.

Trichoderma, also known as green mold, is widely distributed in various plant residues, soil and air. Trichoderma spread by spores, often through the air, water droplets, insects, raw materials, tools and operators of the hands, clothing and other media, invade the medium, once the conditions are appropriate to germination and reproduction damage. When the production environment is not clean, the culture material is not completely sterilized, the inoculation operation is not strict, and in high temperature and high humidity conditions, it will give opportunities for the infection of Trichoderma, especially years of mushroom field and old mushroom house, often TrichodermaçŒ–ç— Harmful places.

Trichoderma can grow in the range of 4 to 42Â°C. The spores germinate in a high-humidity environment. When they invade the mushroom culture medium, they are white cotton flocks at the initial stage and green at the later stage. If the strain is endangered by Trichoderma, it must be scrapped. Even mildly susceptible strains should be abandoned.

Trichoderma has no ideal curative drugs so far, commonly used bactericidal drugs, only inhibition of Trichoderma, rather than killing, increase the dose, can only kill Trichoderma and mushroom mycelium. Therefore, the creation of an ecological environment suitable for the growth of mycelium of mycelium is not conducive to the reproduction of Trichoderma, and it is the fundamental measure to control the damage.

In the event of trichoderma damage, it is necessary to immediately ventilate and reduce humidity in order to suppress the expansion of Trichoderma. After the culture material in the fungus stage is infected, the injection of liquid can be used to suppress the expansion of Trichoderma. The commonly used liquid is 5%. Stone carbonic acid, 2% formaldehyde, 1:200-fold 50% carbendazim, 75% thiophanate-methyl, and lime water with a pH of 10, in addition, the ash surface was sprinkled to the pollution site, and the control effect was also good.

The growth of Trichoderma was villous, white or gray at the beginning of growth and pink and yellow at the late growth stage. In the case of a large number of conidial piles, the appearance is similar to that of the Hericium erinaceus fruit body. The Streptomyces spp. is mainly contaminated and is the most important bacterium in the high temperature season. The spores of Streptomyces sp. are strong and have the characteristics of rapid reproduction. Once they occur, they are the catastrophe. The consequence is that the strains, culture bags or culture blocks are scrapped in batches.

To prevent Streptomyces, we must first avoid the production of high temperature seasons. The temperature of the mushrooms during the fungus stage is preferably controlled below 20Â°C, so that the growth of the cladospores is slow and the pollution can be reduced. The dampness of the mushroom germination site is conducive to the occurrence of Trichoderma, so controlling the humidity in the germination site can effectively prevent the occurrence of Streptomyces. The control of Trichoderma spp. can be controlled with reference to Trichoderma spp. When the fungus bag is produced, if it is found, the diesel oil will be dripped on the conidia group to prevent the spread of the cladosporium. After the fungus bags are infected, they should not be lightly scrapped. The infected bacteria bags can be buried in soil with a poor 30-40 cm deep air permeability. After 10-20 days of anoxic treatment, the disease can be effectively reduced. Fruiting.

Mucor also known as black mold, long hair mold, hyphae initially white, after the gray to black, indicating a large number of mature sporangia. The bacteria are found everywhere in soil, feces, grasses and air. It has a high incidence of high temperature, high humidity, and poor ventilation. The growth rate was significantly higher than that of the mushroom mycelium, and the mycelium of the mold could extend for about 3 cm per day.

The main reason for this is the use of moldy raw materials in the substrate. The inoculation environment contains more spores of mucormycetes, hyphae culture in the boring wet environment and so on. The control method is the same as that of Trichoderma.

The crickets include spider mites and bacilli. The environment in which it occurs is mainly hidden in manure, feed, and culture materials. Chicken coops, grain warehouses, or places with poor environmental conditions, and where humus is abundant, often have a large number of cockroaches. Apes are very small, and they are often overlooked in the early stages of their development. Acarids may cause harm at all stages of mushroom production, feeding on mycelium and fruit bodies of shiitake mushrooms.

After the damage of the culture medium, the strains of the inoculated part do not germinate or the appearance of the mycelium after the germination is sparse and diminution, and the hyphae in the culture material are completely eaten up in severe cases, resulting in failure of cultivation.

To do a good job in environmental sanitation in the cultivation of bacteria can effectively eliminate the occurrence of scurvy. For the bacteria culture room where the pests have occurred, use drugs such as dichlorvos to fumigate and kill them before reusing them. During the culture of mycelium, 1000 times of dicofol or 500 times of Ketek can be sprayed. During the cultivation of fruiting bodies, it is not appropriate to use drugs, otherwise the mushroom body is prone to produce phytotoxicity, and it is harmful to human health after eating.

Chunmee 4011 is one of the treasures of Green Tea.The shape is tightly tied, well-balanced, grey-green frost, oily and fragrant. The picking standard of fresh leaves is the initial development of one bud, one leaf and one bud and two leaves. For those with thick white hair and strong buds, six processes are selected, such as spreading, killing, rolling, baking, frying and re-drying.  Chunmee 4011 Green Tea has special quality and health function, its effect is like rhinoceros horn, has cool and refreshing detoxification, bright eye decrease internal heat's wonderful effect, can treat "fire disease".

Chunmee 4011 are produced by Joy Tea Co.,LTD with high quality and good appearance. Welcome you to visit our company. For inqury, please send mail directly. 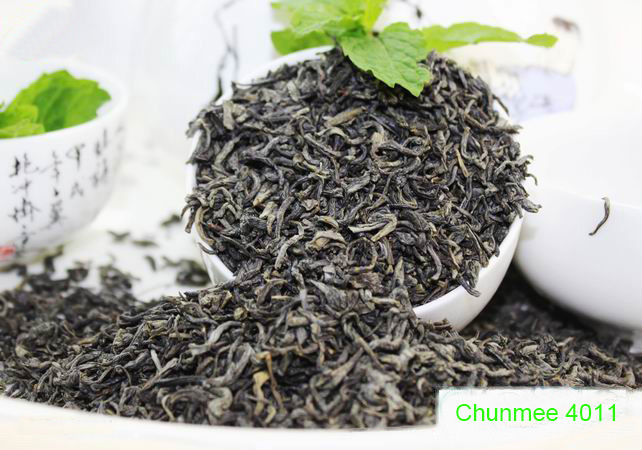